“The National Men’s March to Abolish Abortion and Rally for Personhood is an initiative that Almighty God has stirred up in our time to combat the government-sanctioned, government-funded, government-protected, ongoing, daily mass murder of the preborn and grave exploitation of pregnant moms in need by the lie of abortion. We exist to call, gather, and energize all people of good will, beginning with men as leaders and protectors, to give public witness to the scientific truth that human life begins at conception/fertilization and to proclaim the foundational moral truth that every preborn child is a valuable human person worthy of love and life, regardless of disability and/or how imperfect the circumstances of his or her conception may be. Our nation urgently needs to affirm the Constitutional personhood of every preborn child and begin the healing we so desperately need. The Men’s March and Rally in Boston, MA on Saturday, October 15th is the next opportunity for everyone in the grassroots to lovingly rise up and come together as one in this great cause of our time. You are needed!”

-Jim Havens, Co-Founder of The National Men’s March to Abolish Abortion and Rally for Personhood and Host of The Simple Truth, which airs every weekday from 4-5pm(ET) on The Station of the Cross Catholic Media Network and the iCatholicRadio mobile app.

“We are the precipice of achieving Constitutional Personhood at Conception. We need everyone to come and rally for personhood led by men of all walks of life who are called to be protectors of the vulnerable.”

-Fr. Stephen Imbarrato, “The Protest Priest” and Co-Founder of The National Men’s March to Abolish Abortion and Rally for Personhood, Co-Host of The Simple Truth every Friday from 4-5pm(ET), protestchildkilling.com 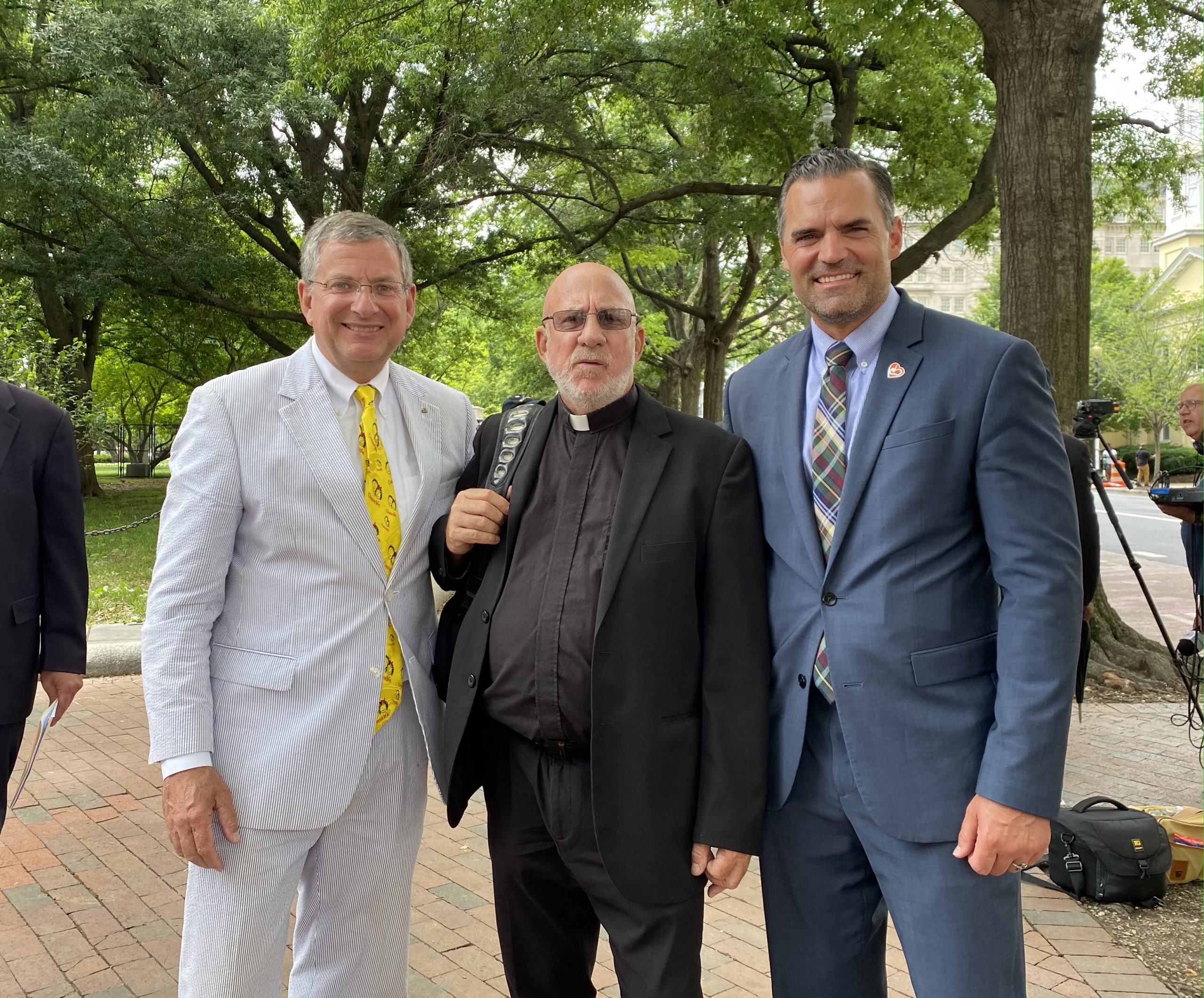 Jim and Fr. Imbarrato at the 2021 Men’s March in Baltimore.

On the Friday, May 7, 2021 episode, the topic was on getting to the end of abortion, and included discussion on the historical efforts of effective non-violence resistance applied to our present day efforts to end the ongoing, daily mass murder of the preborn (and this came on the heels of a show where we looked at a recent article entitled “Catholic Men, Rise Up and Fight” by Leila Lawler and Leila Miller).

After the show, Jim continued the discussion off-air with his wife Becky, and turned to God asking: “What more do you want us to do?”

The idea for The Men’s March emerged, and after more prayerful discernment, Jim and Fr. Imbarrato made the commitment to go forward with the first ever National Men’s March to End Abortion.

In only four weeks, 300 men gathered from all over the U.S., showing up in Washington, D.C., the weekend before Father’s Day (June 12, 2021), to bring our message to President Joe Biden: “Let’s Stop Murdering Our Preborn Children.”

On November 11, 2021, hundreds of men gathered again in Baltimore, MD, outside of the Fall General Assembly of the U.S. Conference of Catholic Bishops, to encourage all Catholic bishops to join us in facing reality, repenting, taking greater responsibility, and committing ourselves to do more to END abortion going forward. Bishop Joseph Strickland gathered with us at our starting point outside of the local Planned Parenthood killing center and marched with us. Bishop Joseph Coffey and Bishop Joseph Hanefeldt joined us at the Rally.

In 2022, three more events are on the horizon – Tallahassee in June, Boston in October, and Baltimore in November. Our model has developed in both name and format – now The National Men’s March to Abolish Abortion and Rally for Personhood, the day is truly two connected events: (1) the gathering outside of the local abortion killing center and subsequent March, which continues to be exclusively for men, and (2) the Rally where the March concludes is now open to all people of good will – women, children, and families are most welcome!